Anonymous
Home of the latest news...
█
Skip to content
“Let’s put an end to this injustice”: Aminatou Haidar on Morocco’s occupation of Western Sahara 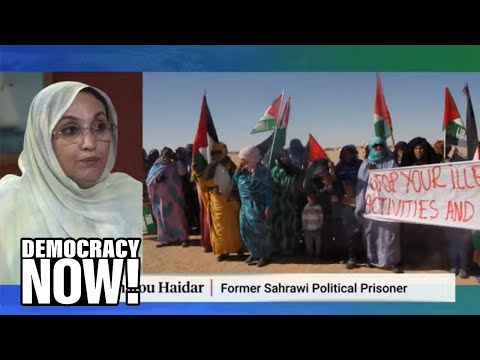 Morocco has occupied Western Sahara — a small region just south of Morocco — since 1975. Thousands have been arrested, tortured and killed resisting the occupation, and the Sahrawi activist Aminatou Haidar — one of this year’s Right Livelihood Award honorees — has been on the front lines of that resistance for the last three decades. “We are in the struggle. Nothing stops us,” Haidar says of the women who have been peacefully organizing against the occupation in the face of rampant sexual violence. “The Sahrawi woman is seen as the spine of the resistance, the driving force of the struggle.” In an interview with Amy Goodman, Haidar recounts her years as a political prisoner and reflects on the possibility for a peaceful resolution to the conflict. The United Nations recently dialed back its diplomatic involvement in the region, which Haidar warns could create the conditions for a younger generation of rebels to take up arms. “Young Sahrawi today do not believe in a peaceful struggle anymore. There are mines around them, there are terrorists all around them. We need to guarantee our rights,” Haidar says. “That’s the reason why I try to say loud that measures should be taken to avoid a new war.”