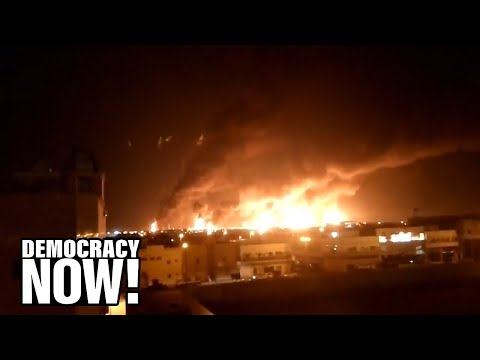 President Trump is threatening to take military action after several large Saudi Arabian oil facilities were attacked Saturday by drones and cruise missiles. Houthi rebels in Yemen claimed responsibility for the attack, but numerous reports indicate the attack may have come from Iraq or Iran rather than Yemen. Crude oil prices soared more than 15% after the Aramco-run plants suffered heavy damage. One of the plants struck is the world’s biggest petroleum-processing facility. According to one estimate, the attacks decreased Saudi’s daily oil output by nearly 6 million barrels. While the United States has been quick to blame Iran, other world powers have not yet assigned blame. In our New York studio, we speak to Peter Salisbury, the International Crisis Group’s senior analyst for Yemen. And from Washington, D.C., we speak with Medea Benjamin, co-founder of CodePink and author of “Inside Iran: The Real History and Politics of the Islamic Republic of Iran.”