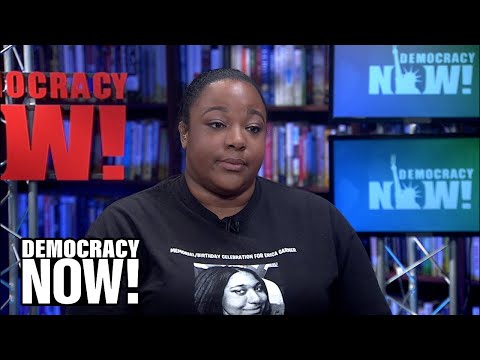 Daniel Pantaleo, the police officer who killed Eric Garner in 2014 by using an illegal chokehold, was fired Monday and stripped of his pension benefits. The decision came more than five years after Pantaleo held Garner, an unarmed African-American man, in a chokehold until he dropped to the ground. Before dying, he gasped “I can’t breathe” 11 times. Despite outcry from the family and community members, Pantaleo had remained on the police force on desk duty since the killing. Last month, on the fifth anniversary of Garner’s death, the Justice Department declined to charge Pantaleo with a crime despite calls by the Garner family and their supporters that the city punish him and other officers involved. Over the years, Garner’s case has helped drive the Black Lives Matter movement for police accountability. His family is continuing their fight for justice, calling on the New York City Police Department to fire the other officers involved in Garner’s death, and vowing to block any appeals made by Pantaleo’s attorney. We speak with Eric Garner’s youngest daughter, Emerald Garner.