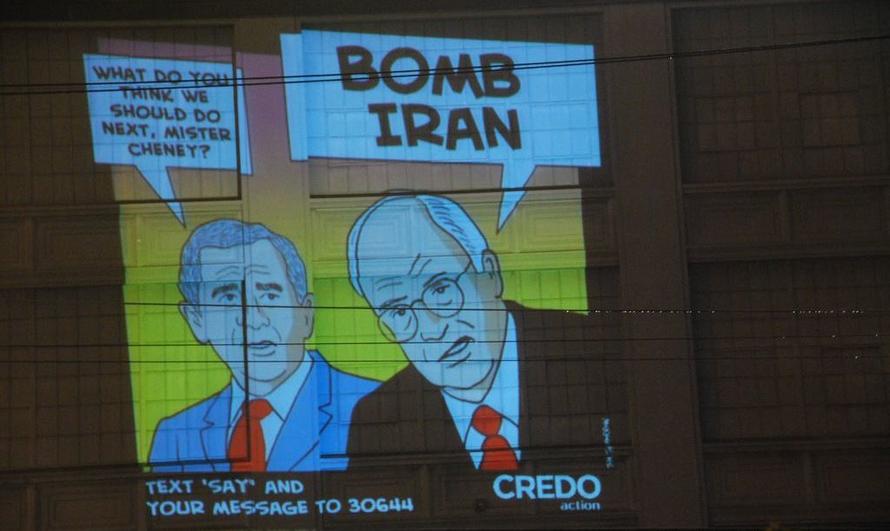 Authored by Brian Cloughley via The Strategic Culture Foundation,

In 2007, when making a speech during his bid for the presidency of the United States, the late Senator John McCain spoke about Iran’s supposed nuclear weapons’ programme and when questioned as to whether there might be US reaction to such allegations responded by singing “That old Beach Boys song, Bomb Iran… bomb, bomb, bomb, bomb.”

This jovial retort about killing people by bombing them was not surprising to those who remembered that during the US war on Vietnam McCain was shot down on a mission to bomb a power generation plant in Hanoi, the capital of North Vietnam, in the course of the entrancingly-named Operation Rolling Thunder.  If he hadn’t been shot down before he released his bombs there would almost certainly have been civilian casualties and deaths. Power stations in cities are not manned by soldiers, after all, and around the Hanoi plant there were houses that would doubtless be struck by errant bombs.

But who cares about civilians who are killed or maimed in bombing or rocket attacks?

In Syria, for example, in October 2018 “the US-led coalition was responsible for 46% of civilian casualties from all explosive weapon use in Syria.”

And in November Reutersreported that “At least 30 Afghan civilians were killed in US air strikes in the Afghan province of Helmand, officials and residents of the area said on Wednesday, the latest casualties from a surge in air operations aimed at driving the Taliban into talks.”

Forbes records that “the US has never dropped as many bombs on Afghanistan as it did this year. According to U.S. Air Forces Central Command data, manned and unmanned aircraft released 5,213 weapons between January and the end of September 2018. The UN announced that the number of civilian casualties in the first nine months of 2018 is higher than in any year since it started documenting them in 2009.”

On January 25 Defense Post reported that “Afghanistan is investigating reports that at least 16 civilians including women and children were killed in an airstrike in southern Helmand province, the defense ministry said in a statement.” On and on its goes — Bomb, Bomb, Bomb Afghanistan.

There’s nothing new in this, so far as US Secretary of State Pompeo is concerned. As a member of Congress in 2014 he made it clear that he was one of the bombing club. As The Nation reported, “Representative Mike Pompeo (R-KS), participating in the same [Foreign Affairs Committee] roundtable, urged the United States and its allies to strongly consider a pre-emptive bombing campaign of Iran’s nuclear sites. He said ‘In an unclassified setting, it is under 2,000 sorties to destroy the Iranian nuclear capacity. This is not an insurmountable task for the coalition forces’.”

The fact that when Pompeo was asked at a US Senate hearing in April 2018 if he was supportive of a preemptive strike on Iran he declared “I’m not. I’m absolutely not” is indicative only of the fact that he is given to duplicity.

Which brings us to Trump’s National Security Advisor, John Bolton, who has been an advocate of bombing for many years.  He is the man who declared in November 2002 that “We are confident that Saddam Hussein has hidden weapons of mass destruction and production facilities in Iraq” and four weeks before the US invaded Iraq, according to Israel’s Haaretz newspaper in February 2003, “US Undersecretary of State John Bolton said in meetings with Israeli officials on Monday that he has no doubt America will attack Iraq, and that it will be necessary to deal with threats from Syria, Iran and North Korea afterwards.”

Iraq was duly bombed and rocketed and reduced to chaos, and Bolton was totally unrepentant. In an article in the UK’s Daily Telegraph in 2016 he pronounced that “Iraq today suffers not from the 2003 invasion, but from the 2011 withdrawal of all US combat forces. What strengthened Iran’s hand in Iraq was not the absence of Saddam [Hussein], but the absence of coalition troops with a writ to crush efforts by the ayatollahs to support and arm Shi’ite militias. When US forces left, the last possibility of Iraq succeeding as a multi-ethnic, multi-confessional state left with them. Don’t blame Tony Blair and George W Bush for that failure. Blame their successors.”

In November 2016 Bolton was aptly described by MSNBC host Joe Scarborough as “a massive neocon on steroids” but the Financial Times argues that he is not a neocon, because “Neocons believe US values should be universal. Mr Bolton believes in aggressive promotion of the US national interest, which is quite different.”  Be that as it may, there are some things that are certain, such as that Bolton is a rabid warmonger who avoided serving in Vietnam just like Donald Trump and George W Bush and Bill Clinton and Dick Cheney and many others. (And here it has to be said that my feelings are strong about this, having served in Vietnam in the Australian Army in 1970-71.)

As noted by the Daily News of his Alma Mater, Yale, “though Bolton supported the Vietnam War, he declined to enter combat duty, instead enlisting in the National Guard and attending law school after his 1970 graduation. ‘I confess I had no desire to die in a Southeast Asian rice paddy,’ Bolton wrote of his decision in the 25th reunion book. ‘I considered the war in Vietnam already lost’.”  But now that it is obvious that Washington lost its wars in Iraq and Afghanistan, Bolton is ready for another one.

In July 2018, while tension between the US and Iran was heightening, the Iranian president, Hassan Rouhani, warned Washington about pursuing a hostile policy against his country, saying “Mr Trump, don’t play with the lion’s tail, this would only lead to regret… America should know that peace with Iran is the mother of all peace, and war with Iran is the mother of all wars.”

That was a red rag to a bull, and Trump responded in his normal way by tweeting “To Iranian President Rouhani: NEVER, EVER THREATEN THE UNITED STATES AGAIN OR YOU WILL SUFFER CONSEQUENCES THE LIKES OF WHICH FEW THROUGHOUT HISTORY HAVE EVER SUFFERED BEFORE. WE ARE NO LONGER A COUNTRY THAT WILL STAND FOR YOUR DEMENTED WORDS OF VIOLENCE & DEATH. BE CAUTIOUS!  — Donald J. Trump (@realDonaldTrump)”

That is frightening.  Any world leader who tweets such things as “North Korea best not make any more threats to the United States. They will be met with fire and fury like the world has never seen” is verging on the psychotic. And, in his own words, the demented.

Trump’s former foreign policy officials were not altogether in favour of having Iran and North Korea suffer unspecified but obviously terrifying consequences for having expressed its views on Trump policy, but now, as the BBC notes, “Mr Trump has built a foreign policy team that is largely on the same page – his page.”

That’s the Fire and Fury ‘page’, and it’s being proof-read and expanded by Pompeo and Bolton.  Stand by for Bomb, Bomb, Bomb Iran.