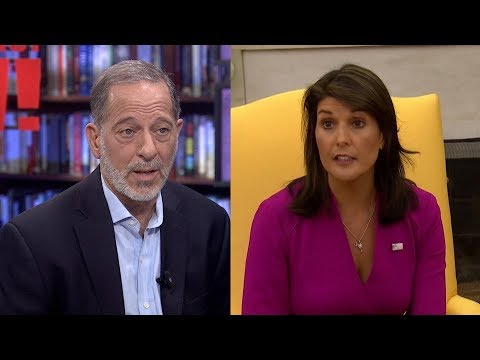 https://democracynow.org – U.S. Ambassador to the United Nations Nikki Haley has announced she is resigning her post at the end of the year. The former South Carolina governor—one of the few women in Trump’s Cabinet—gave no reason for her departure. During Nikki Haley’s time as U.S. ambassador to the United Nations, the United States withdrew from the Paris climate accord; the U.N. Human Rights Council; the Iran nuclear deal; UNRWA, the U.N. agency that provides humanitarian aid to Palestinians; and UNESCO, the U.N. Educational and Cultural agency. We speak with Rashid Khalidi, Edward Said Professor of Arab Studies at Columbia University, about the significance of Haley’s departure and the role of the United States at the United Nations. Khalidi is the author of “Brokers of Deceit: How the U.S. Has Undermined Peace in the Middle East.” His next book, titled “The Hundred-Years War on Palestine” will be out in May.