Anonymous
Home of the latest news...
█
Skip to content
Could Brazil Return to a Dictatorship? Glenn Greenwald on Possible Election of Far-Right Demagogue 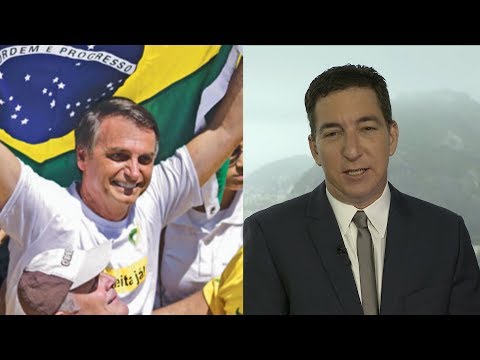 https://democracynow.org – Voters in Brazil head to the polls on Sunday in an election that could reshape the political landscape of South America. Polls show the current frontrunner is the far-right Jair Bolsonaro, a former army officer who has openly praised Brazil’s military dictatorship, which lasted from 1964 to 1985. Bolsonaro has a long history of making racist, misogynistic and homophobic comments, and has risen in the polls since September 8 when he was stabbed while campaigning. His campaign directly benefited from the jailing of former President Lula Inácio da Silva in April, who had been leading in all presidential polls before being forced to drop out of the race. Lula’s hand-picked successor, Fernando Haddad, is currently placing second in most polls. We speak with Glenn Greenwald, Pulitzer Prize-winning journalist and one of the founding editors of the Intercept. He has been covering the election from Rio de Janeiro.